Wine and volcano, a natural pairing, almost inevitable. The force of the volcanoes immediately makes you think of the fullness of the wine, with its infinite shades and seems to play in the tone of the liquid that we pour in the glass. However, in Milo, this parallelism gets richer with an unexpected variation. In fact, around here the finest wine is pale yellow, bright, clear, with a dry taste, round, not highly alcoholic. But how, you might be asking, where’s the force of Mount Etna? 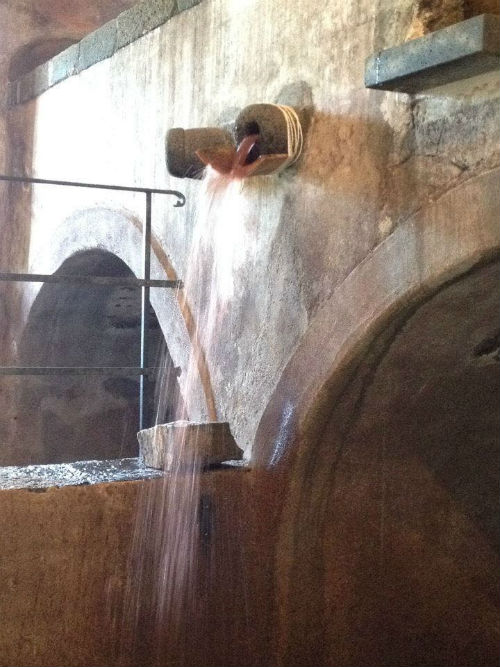 Once again, the volcano astonishes. From its soil rich of minerals, not too distant from the smoking peak that seems to loom over the vineyards, a nectar for sophisticated palates is produced; it has nothing in common with the fiery and crass wines loved by the English soldiers of the 1800, also came the county of Mascali. 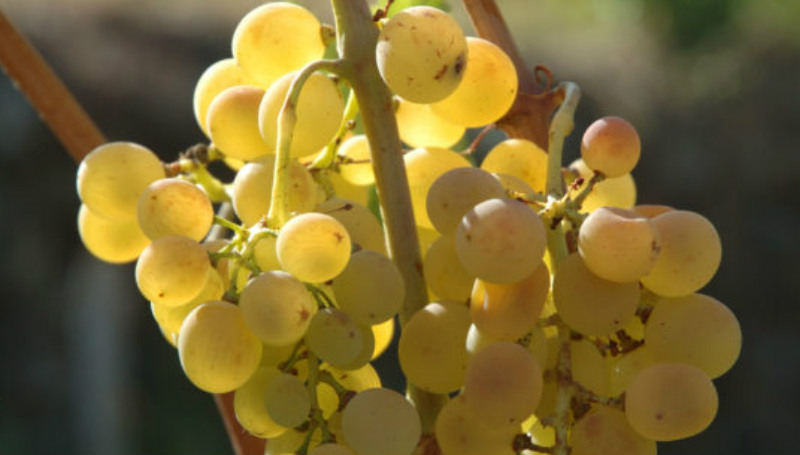 The Etna Superior White, this is how the disciplinary of Doc of Etna production that reserves this attribution exclusively to the Town of Milo defines it, is therefore the exception to the rule, the right completion of a parallelism that otherwise would be inadequate. We continue to also reaffirm the natural pairing of volcano and wine, but let us remember that the Etna cannot be reduced only to a flaming advancing of lava. Our volcano is also a great mountain, kingdom of snow and ice, and therefore the wine also reflect this wealth of aspects: “the Etna Superior White – writes Mario Soldati – collects and fuses in it’s paleness and in its aroma, in its freshness and in its hidden feature of smoky, the perennial snow of the peak and the fire of the volcano”. Once entered in the game of metaphors, it is difficult to come out of it. But how could you resist to this subtle temptation when speaking of grapples and wine? How could you not be tempted by the successful image of Soldiers? To drink a good wine is after all a very meaningful act. Behind a glass of transparent white or full red, there is often a secular history, an artisanal craft; the same events of Etna’s territory are strictly related to the progress of viniculture. According to the bourbon land registry of 1844, the areas and the vineyards of Milo comprised the 73.3% of the total, while this percentage went down to 55.3% in Piano del Praino. The vineyard advancing (but also of the pasture) inevitably meant a further retreat of the woods, which between the ‘500 and ‘600 was already largely resized by indiscriminate cuts, often motivated by military needs. Afterwards, as reported by Enrico Iacchello in an extensive study dedicated to grape culture in the county of Mascali, the progress of the national and international market had an immediate effect especially on the marginal areas, on the slopes of Mount Etna. The mountain vineyards were abandoned or cultivated based on the outlets that the traders of Riposto assured on the markets of the peninsula or in Malta.

The same terracings that today are the predominant in the agricultural landscape of Etna are a relatively recent invention, because since the first decades of the past century the stone walls were used only to surround the vineyard which, therefore, continued to be planted on uninterrupted slopes. Only with the colonization of the impervious zones, realized thanks to gunpowder, some resourceful cultivator thought to use the stone obtained to realize terraces to make easier the work of conduction of the vineyard.

But let’s come back to the reality of our days. The vineyard, as it’s easy to understand coming near to the center of Milo, it’s not the dominant culture anymore. It’s been supplanted on the plains of citrus fruits and vegetables, has lost the importance it had once even in the highest places.

From 1968 a specific regulation has instituted the Etna’s wines with original denomination controlled, which are the Etna White, Red, Rosy, and Superior White, which – as already said – is limited to the Town of Milo. It tends, therefore, to privilege quality over quantity. Obviously, even inside the area of origin of the “Doc” can be obtained normal table wine, but are under the qualitative standards required for the “Doc”. For the Etna Superior White is prescribed that it should be obtained, at least for 80%, from “carricante” grapes, an esteemed local vineyard, and has to be at an alcohol level of at least 12%, while the total acidity has to be contained between 5.50 and 7 per thousand. Fit to fish-based dishes and appetizers, the Etna Superior White must be enjoyed to the fullest in its first two years. The Etna Red “Doc” is obtained from the traditional vineyards “nerello mascalese” and “nerello mantellato”; its alcoholic level cannot be inferior to 12.50. Most of the wine produced in Milo (Superior White in good quantity and mostly Red) is marketed directly by the producers. This way is created a solid trust-based relationship between the consumer (or small retailer) and vintner.

Buying the wine necessary to the familiar consumption becomes often occasional for an enjoyable trip “out of bounds2. Even though naturally the modest dimension of the companies denies an organic promotion outside the usual space of enthusiast consumers. Going through Milo and its boroughs it is easy to meet some improvised local fruit retailer, which is usually marketed directly by the producers. During the periods of harvest and for many months after, it is possible to purchase Etna’s apples, pears and hazelnuts (sometimes even cooked). The fruit comes from the town surroundings, especially from some renowned contradas like Pietracannone. There are many varieties of apples and pears known and loved by connoisseurs who appreciate the subtle shades of taste.

Gelato cola, Delicious red, Golden Delicious are the varieties of apple most common locally. The cultivation of the apple tree is normally performed at between 600 and 1200 meters of altitude, in mountain places were would not be possible other agricultural activity.

Particularly appreciated in Milo are the varieties of Gelato Cola and Cola (called also Limonella) which is left to rest after the harvest in fresh warehouses in the town until January-February when it reach the perfect maturation. 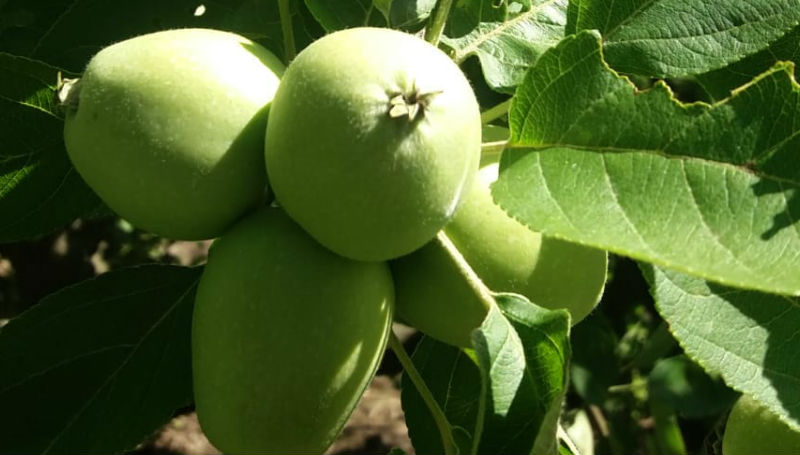 Very rich also is the choice of pears, from the Coscia to the Butirra, to the varieties nowadays in extinction like the Spinelle pears. The Coscia par, present both as specialized culture and in the context of vineyard, has the benefit to mature prematurely and be ready for consumption since July. 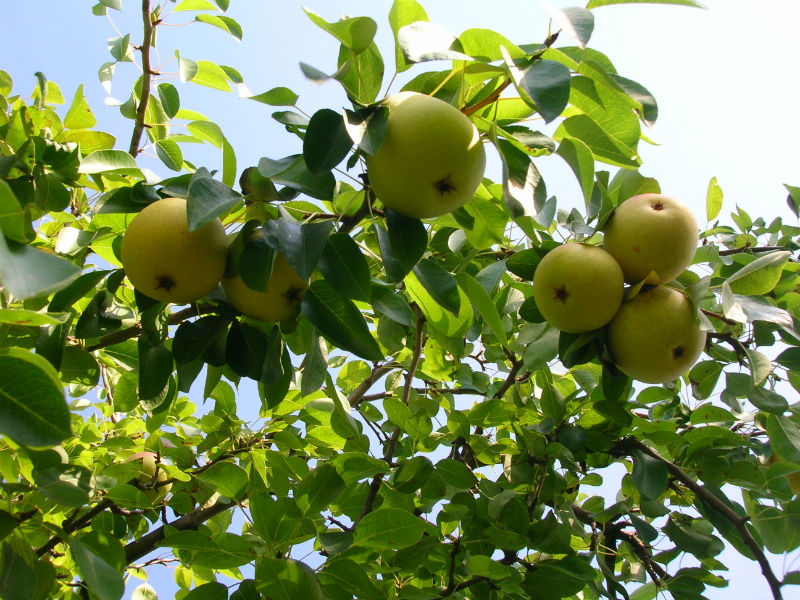 The most reliable assurance on the goodness of these Etna’s fruit, usually small and with an intense taste, is given by, nevertheless, by the same milese, which consume them in large quantity, drawing on the familiar reserves jealously kept in the freshest little nook of their residence.