The Antica Dimora Benanti is located in the territory of Milo on the eastern slope of Etna.

Located a short distance below the town, it has the typical structure of the manor house of Eastern Sicily, surrounded by a luxuriant cherry tree and an olive grove of plants typical of the Etna area, which bring shade and coolness. From its windows and terraces you can enjoy the splendid view of the highest active volcano in Europe and the blue expanse of the Ionian sea that extends from Taormina to the Gulf of Catania. For lovers of the tranquility of the high hills, of the fresh and fragrant air of oak, holm oak, birch and resinous conifer woods, it is the ideal place for a relaxing and pleasant stay, in direct contact with nature. It is also situated in a strategic position to visit the most fascinating places in the eastern part of Sicily.

The Antica Dimora Benanti is a structure on two floors dating back to the beginning of the 20th century, recently completely restored in a faithful manner at the time of its construction, surrounded by two bodies of nineteenth-century cellars, which delimit the large courtyard facing east, protecting it in winter from the colder winds of mistral, tramontana and ponente.

The entire apartment available to guests is located on the upper floor of the building. With a surface area of ​​approximately 110sqm it offers bright and comfortable rooms: a spacious living room, three bedrooms (two doubles and the third single, to comfortably accommodate up to 5 people), a kitchen equipped with everything you need, a bathroom, two terraces with a splendid view of the sea and the volcano: the first on the level, the second on the upper floor.

From the living room, through its three large windows, you can enjoy the splendid panorama on the eastern flank of Etna, its summit, often crowned by the typical fumaroles and chestnut woods on the sides of the steep walls of its narrow valleys; the view of the three bedrooms ranges from Mount Etna to the Ionian Sea, lingering over the tall fir trees of the driveway, the cherry orchard and the olive grove belonging to the estate and the thousand embankments and terraces that lead quickly to the Ionian Sea. 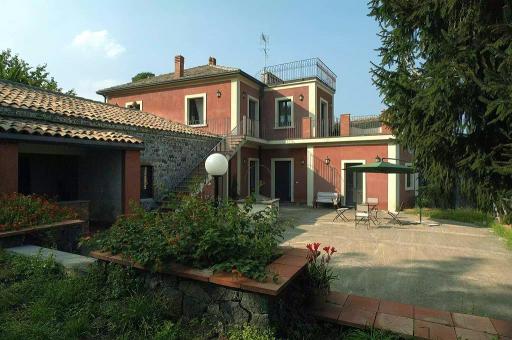